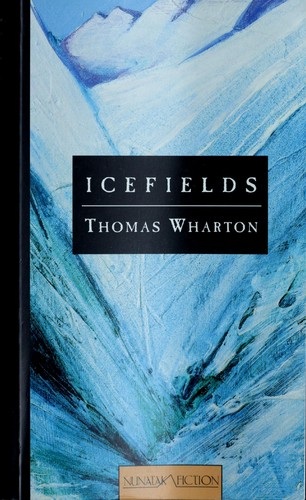 I’m often asked why I write about books in my free time (and for free, no less). For a long time, I struggled to come up with a concise answer. Writing about my reading comes with a lot of positives–community, encouragement, inspiration, challenges, exposure, reinforcement–but I’ve always stopped short of saying these were reasons that Another Book Blog exists.

After reading Icefields by Thomas Wharton, I thankfully don’t have to. Suddenly, after five years of doing this, the reason for this blog has become very clear.

There’s a moment in Icefields where two characters are talking about poetry and journalism, and the moving target that is writing. With each field, the goal is never perfection. The best a writer can do, they surmise, is produce something that simply approaches what he or she really feels. That’s because even getting close is incredibly hard.

—I haven’t written anything in months. When I saw my words in print I wanted to run away and hide. Maybe that’s why I ended up here.

—What was wrong with your words?

—One poem described a lizard crawling across a mirror, but it was just a symbol. Of what? I cannot remember. It was an idea, I hadn’t actually seen it. In other poems I used words like lute and arbalest. I realized that I’d written about nothing that I’ve lived through. None of it was my life, my experience.

—Words always do that to me, even when I’m reporting what we like to call the facts. I think to myself, was that really what I saw, what I felt? But I keep trying, I have to try to nail things down with the exact words, and sometimes I feel I’ve come close. That’s the reward. To feel the nail go in and hold something.

This, my friends, is the true reward of book blogging, and the reason Another Book Blog exists: the feeling that happens when I write about a book and “feel the nail go in and hold something.” Something true or meaningful.

If a person reads a lot (which I’m sure you do, if you’re here) it’s actually quite difficult to remember everything (or anything, really). This blog is a place where I can gather my thoughts and interpret what I’ve just read. This is where I allow myself the time to contextualize what I read, to look beyond the surface (i.e. the plot) for something a little bigger, something more substantial.

How does a book relate to my life? How does this help me work through anxieties or troubles I’m having? Does this book allow me to understand something in a different way, or empathize with someone who I previously couldn’t? Was it funny, or fun, or wise, or transcendent, or wistful, or beautiful, or heartbreaking, or powerful, or challenging, or difficult, or an absolute waste of time?

It’s about me saying, “these were the things that meant something to me, these are the pieces I don’t want to forget.” Or as Thomas Wharton puts it, recording “what I saw, what I felt.”

A few months ago, a blogger I semi-follow (who shall remain nameless) took to Twitter and wrote an impassioned tweet about how people don’t read to “improve” themselves. They read to be entertained. At the time, I disagreed, and I vehemently disagree now.

This person said, and I quote, “no book on earth will ‘improve’ you.”  To me, this wasn’t just flat out wrong, but it was almost sacrilegious coming from someone who spends much of her free time sharing her love of reading with people.

If you don’t think you’re bettering yourself in some way with the books that you read, then either a) we’re coming at this from two different philosophical places, or b) you need to read better books.

Now, I know it’s not the second one because I’ve read her blog (a lot) and she’s very well read and she thinks intelligently about her books. So it has to be the first one.

If she doesn’t think the 10 best books she’s read in her lifetime haven’t improved her or made her a better person–in small ways; I’m not even talking about huge leaps here, or going from a “bad” person to a “good” person–she’s being unnecessarily cynical about the whole endeavour. I’m talking about going from a 6/10 to a 6.1. And that 0.1 is a great book, that is one of the great books in your life.

If you read enough of them, those 0.1’s add up, and you’re getting better, if only incrementally. It’s just a book, it’s probably not going to drastically change your life (although it can), but it’s going to make you better in small ways.

If you’re not occasionally reading to understand someone in a situation other than your own, then I don’t know what the fuck you’re doing. You might as well be eating junk food. Reading should put something into you that wasn’t there before.

Books are comprised of hundreds and hundreds of pages written down by, literally, the smartest, wisest people who have ever walked the Earth. If you read something from one of these geniuses and it doesn’t move you or change you in just a small way then you weren’t paying attention. You must not have been. (And let me be clear, not every book hits its target with you; lots of books won’t move you, but lots of them should).

Learning ANYTHING makes you better. The person this blogger was tweeting about–who said they read to improve themselves–was probably not saying that every book they read improves them, or that they don’t also read for pleasure. That person loves reading, they get joy out of reading. Of course they do, everyone who reads does. But you can do both–enjoy and improve–at the same time.

I’m not saying that “improvement” reading makes a person superior to anyone else, or that readers have an intellectual capacity or thirst for knowledge that normal people don’t have. What I am saying is that reading makes you superior to the non-reading version of yourself.

Even if you read a YA-fantasy novel, there’s a chance that you’re going to get something worthwhile out of it. If you learn something about love, or how to treat people, or the value of friendship … that stuff could be making you better, who knows. Maybe they’re not even 0.1’s, they’re 0.05’s.

These “0.1 reads” are making you a better person, whether you know it or not. If you take something from a book and use it somewhere, somehow in the future, you are better off than you were before.

Later in my Twitter conversation with this person, she clarified that the concept of bettering oneself though a book isn’t foreign to her, but that’s not “why” she reads. I feel the need to point out that those are two completely different things.

Reading is the same. People typically don’t start a book with the goal of becoming a better person. Most of us (myself included) crack open books because we want to be entertained. But while we’re doing that, we’re learning stuff.

So whether or not improvement is your goal, it’s happening regardless; and to say that no book has ever improved you simply because that’s not “why” you do it is false.

In addition to the many, many studies that show that reading strengthens your brain, it’s very possible that my back went up during this conversation because of the little English major inside of me, the one who decided to spend years of my life and tens of thousands of dollars with the hopes that reading is making me better, and that the way I live my life is a worthwhile pursuit.

I’ve realized–and this was an incredibly long-winded and winding tangent to get to my point here–that I write this blog so that I can figure out how these books are affecting me. And when I figure out how they are, THAT is the feeling of the nail going in and holding something.

I’ve given up blogging many times over the years, each time because I didn’t see the point of it. Simply recapping plots is, if I can paint with an unfairly wide brush here, a waste of everyone’s fucking time. If you’re going to read a book, and then if you’re going to spend hours crafting a piece about that book, then write about how it made you feel, or how it taught you something, or how it subverted your expectations. The times I quit blogging, I did it because I realized I was offering my readers nothing of value. I was saying whether or not I liked a book and left it at that. Who gives a shit. You don’t need to know that. I barely need to know that, for crying out loud.

The only thing that should matter is whether that experience was important or not.

Favourite Quote: “I took a poet on a packtrip a few years back, Trask said to Hal the first day. Well he was a painter and a poet, that’s what he called himself. He told me his god was Nature. I thought to myself, We’ll see about that. When we set up camp the first night he took a stick and scraped himself a little trench around his tent and pissed in it. I said, why the holy circle? And he informed me, quite seriously, that it would keep away the bears. So I told him it was a rare pleasure to meet a god-fearing man.”

Why Icefields is Worth Reading: I should probably talk about the book a little bit after nearly 2000 words, right?

What Icefields does so brilliantly is talk about how we capture history, or, perhaps more importantly, how we fail to capture history. So much of our history is completely lost, including the stuff we think we’ve captured, or logged, or preserved. But we’re almost never telling a complete story, it’s practically impossible. Writers are the ones who have the balls to think, perhaps arrogantly, that we can capture these moments accurately. Icefields is about the incomplete record, I guess, and how incomplete records have shaped every part of who we are.

Distinctions: Not only did Icefields have the honour of winning the Banff Mountain Book Grand Prize, the Writers Guild of Alberta Best First Book Award, and the Commonwealth Best First Novel Prize, but it was one of the first books chosen for Canada Reads, way back in 2008.

Finally, Please Watch the Most Insane Review of This Book:

9 thoughts on “Icefields by Thomas Wharton”